What Is a Corporate Explainer Video?

Answer all the questions that your customers may have about a product or a service in a single explainer video. This approach preempts the need to answer questions that have already been asked by customers in the past.

Prospects are interested in knowing what your current customers have to say about your service. Create testimonial videos to share the trust shown by your existing customers.

How-to videos provide businesses with an easy way to explain how a product or service works. They can be used to explain the working of technically advanced products or services to potential customers in a simplified manner.

Explainer videos are among the most commonly produced types of videos, thanks to their promising benefits for businesses looking to market their products and services.

Here are a few useful tips to help you get the most out of your corporate explainer videos.

The script is the core of an explainer video. The ideal length of a script should be between 100 and 200 words depending on the length of the video. In some cases, corporate explainer videos may go as long as 10 minutes.

The graphics must target your audience’s needs and include things or items that people encounter on a daily basis; the presented material must be relatable to your audience.

The tone of the voiceover is very important. Select a friendly male or female voice, taking into consideration what accent, tone, and inflection emphasize your unique brand personality.

The animation style must bode well with the audience, aiding in conveying the message and purpose of the video. If your corporate explainer video represents a more serious brand, you should consider using motion graphics. However, if it is a business that gives room for a little fun, you may consider using cartoon characters.

Benefits of a Corporate Explainer Video

Here is a look at how a corporate explainer video can benefit your business and contribute to your marketing strategy.

Cisco estimated that videos will make up 82% of all content on the internet by 2021.  Thus, if you haven’t already considered creating video content, you must get a jump on it to give your brand a head start. Not only will that give you a slice of 82% of the internet, but it will help increase your followers as your audience will eagerly expect more video content from you in the future.

The number of businesses using video on their landing pages jumped from 49% in 2017 to 60% in 2018. That is largely due to the huge potential of videos in increasing conversions; adding a video to your landing page can increase conversion rates by up to 80%. One of the most popular explainer videos was that of Dropbox, and it transformed the company from a startup to a technology giant. Dropbox’s landing page had nothing but an explainer video and a download button, which means that the 10% increase in conversions and the ten million new customers Dropbox converted were solely thanks to the explainer video. Visual content, in general, helps improve your brand visibility and engage your audience, thus leading to enhanced conversions. 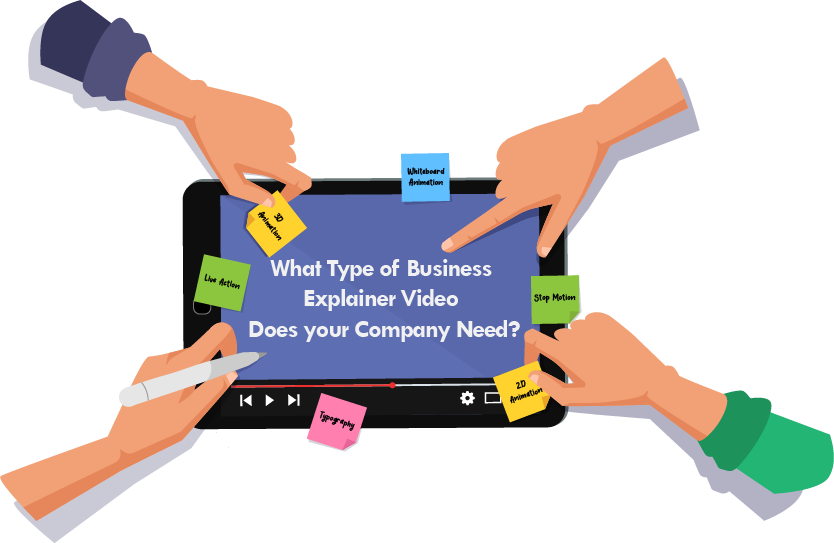 Explain Your Ideas Easily and Quickly

Business ideas can sometimes be difficult to explain. Use of an explainer video on your homepage presents your visitors with a quick way to understand and interact with your brand online. Therefore, an explainer video can help you effectively communicate your brand’s USPs.

The key to building brand equity is developing an awareness of your brand and influencing how people see, think, and feel about it. And there is no better way to determine how your brand is perceived than using explainer videos for your products or services, shaping your brand in a way that distinguishes it from competitors and increasing its commercial value.

Most businesses topics are mind-numbing, difficult, and more often than not fail to hold the audience’s interest. However, businesses should understand how people think in order to succeed. An explainer video is the only way to deliver content in a colorful, capturing manner, without having to compromise the importance of the topics discussed while making that information more memorable than any written way of communication.

Providing sufficient and equal training to all personnel can be challenging and often requires constant repetition of the information that your workforce needs to retain. The text has a low memory retention rate, close to 10%. Videos offer a much higher memory retention rate of up to 68%. Thus, the use of videos can improve your staff’s ability to master new skills and help them acquire knowledge quickly and maintain it for a longer time.

Vervevideos has taken a special interest in the aviation industry and has created many corporate explainer videos for our aviation business clients.

The MEBAA (Middle East Business Aviation Association) corporate explainer video had a clear message and objective: to introduce their association to the aviation industry and to the public in general. The corporate video discusses MEBAA’s foundation and mission and introduces its professional affiliations. It follows the timeline of how MEBAA has been progressing since it was founded in 2006 and features customized animation, graphics, and a friendly female voiceover. It also discusses MEBAA’s vision and how they utilize various tools to achieve success. The video concludes by presenting the benefits of becoming a member of MEBAA and finally showcases MEBAA’s biannual airshow. The video sends a persuasive invitation to all aviation industry stakeholders to become part of MEBAA and reap all the advantages that they offer.

We mixed live-action and animation for the creation of this corporate explainer video for Globini Travel and Tourism. This corporate video augmented the video’s powerful message with moving music and an influential script, beautifully highlighting the more profound reasons for travelling.

The Hershey’s Kisses corporate explainer video was created for the company’s executives. VerveVideos.com only included a few seconds of the 7-minute explainer video for confidentiality reasons. Despite the fact that this video was created exclusively for the internal audience, it was still designed to be engaging and entertaining to watch, using fun music and a friendly voiceover to emphasize the video’s message. This video snippet shares some of the insights and shopping trends discussed in the Hershey’s Kisses corporate explainer video, including how moms in Middle Eastern households are influenced by brands in their daily purchases and the difference in preferences between novice and expert bakers.

This video discusses how a settlement counselor, Manar, helps new immigrants and refugees settle in Canada. It talks about the challenges that newcomers face in Canada, and these problems make it difficult for them to fit into Canadian society. This is where a settlement counselor from Polycultural Immigrant and Community Services comes in. Settlement counselors familiarize immigrants to their new place and style of living, taking into consideration their cultural background. The video goes on to define what settlement means for newcomers and anything else required for them to seamlessly integrate into Canadian society. It also discusses why permanent residents and refugees can access the services of Polycultural Immigrant and Community Services for free. It ends with an inviting call to action for anyone who may require help for settling in Canada.

Leading up to the provincial elections on June 7th, 2018, the city of Mississauga started a campaign titled: “Mississauga Matters” to highlight the provincial government’s priorities. Our collaboration with Canada’s 6th largest city was a special one because it is the birthplace of VerveVideos.com. The provincial government’s goal is to build a complete city—a place where people can live and work and raise a family. This vision was portrayed in three animated videos: Affordable Housing, Public Transportation, and Infrastructure. They were all designed to provoke a sense of community and to encourage the residents to vote, ending with the campaign’s hashtag: Mississauga Matters.